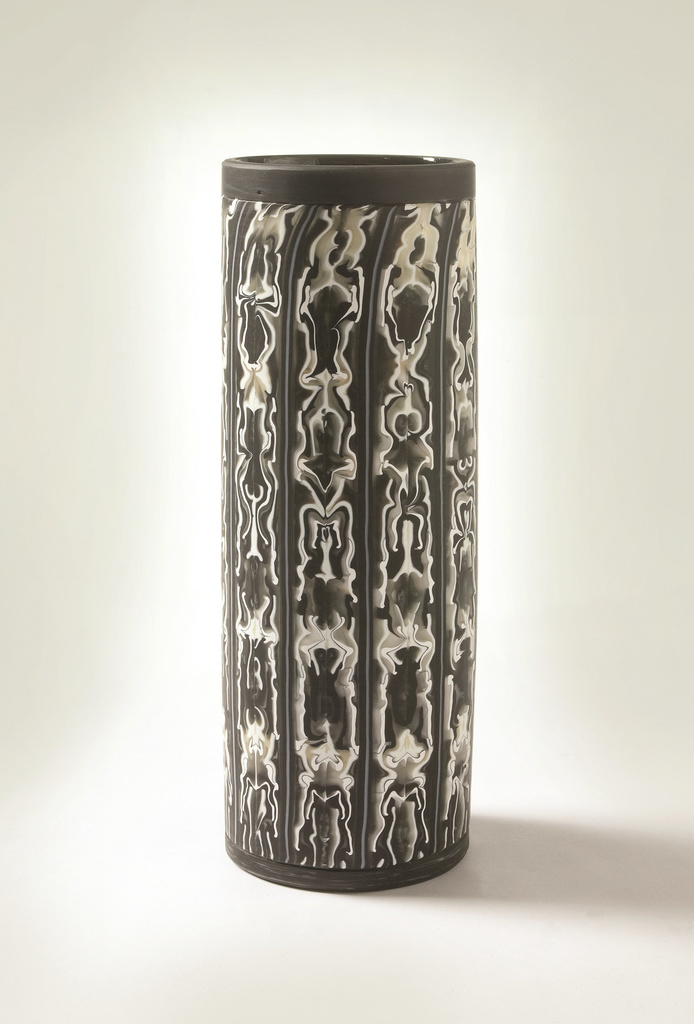 Untitled from the Niijimas series

Klaus Moje’s reputation as artist, teacher and advocate places him in the vanguard of contemporary international glass art practice. After training in the stringent apprentice tradition in Germany (1952-59) Moje worked in as both glass artist and technician. He worked with architectural stained glass for some years before making his first painted and wheel-cut sculptural pieces in 1966. His practice quickly developed from there and in 1975 he showed his first works in mosaic glass. Since his first guest lecture at the Pilchuck Glass School in 1979, Moje has been much in demand and still maintains an active role in art schools, museums, conferences and the like across the international glass spectrum. In 1982 he moved to Canberra to found the Glass Workshop at the ANU School of Art. He retired from that position in 1991 and now lives and works on the far south coast of New South Wales.

He has held numerous solo exhibitions since 1973 including a retrospective at the Museum für Kunst und Gewerbe (1980); Nikki Gallery for Contemporary Art, Tokyo (1992); Klaus Moje: Glass/glas, a retrospective National Gallery of Victoria and touring Australia and overseas (1995-96); and Klaus Moje: Glass, Object Gallery, Sydney and touring (2006). Important recent curated group exhibitions include International glass, Shanghai Museum of Fine Arts, China (2001); Material culture, National Gallery of Australia (2002); Transformations: The language of craft, National Gallery of Australia (2005); Collect, Victoria and Albert Museum, London (2006); and Material matters, Los Angeles County Museum of Art, USA (2006). His work is represented in major national, state, regional, institutional, corporate and private collections in Australia, the USA, Europe, the United Kingdom and Asia. Moje has been honoured a number of times for his contribution and in 2006 was made an Honorary Officer (AO) in the General Division of the Order of Australia in 2006.

Untitled (Niijima series) is exemplary of the roll-up technique that came out of Moje’s period as artist-in-residence at the 10th International Glass Festival at Niijima in Japan in 1997 and perfected on his return to Australia with colleagues Kirstie Rea and Scott Chaseling. The resultant series is characterised by consummate technical control, formal elegance and refinement of concept. Here the simple tubular form is swathed in a swirl of fabric-like pattern reminiscent of the textiles of Edo-period Japan (1600 – 1868). The pattern is divided into vertical planes which reinforce the verticality (and conversely the tubularity) of the vessel and which are contrasted with (and visually connected to) the horizontal planes of the neck and the base. Visual tension is beautifully achieved and completes this exquisitely seductive and eloquent piece.