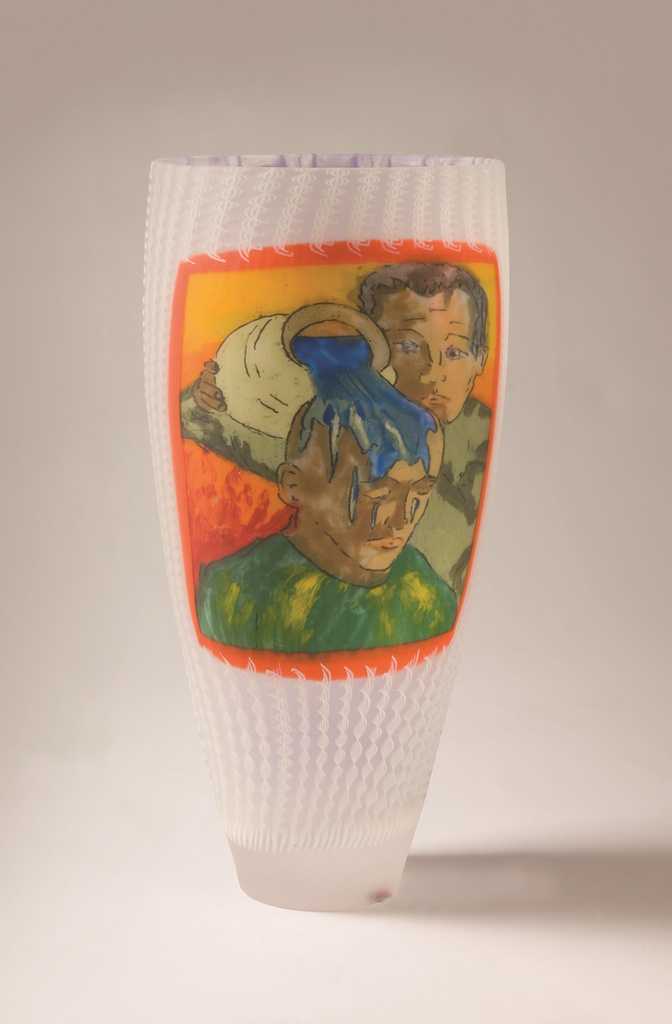 Scott Chaseling initially studied sculpture at art school but in the 1980s he was drawn to the medium of glass and undertook a traineeship in glass-blowing at the Jam Factory in Adelaide. He subsequently worked with glass artists in Australia and the United States of America, and in 1991 completed post-graduate studies in glass at the ANU School of Art.

Chaseling has a strong international reputation in hot glass for his technical expertise and innovation and his conceptual freshness. His work has been included in many solo and group exhibitions in Australia and overseas, and he has been the recipient of a number of prestigious glass awards, including the 2002 Gold Medal at the Bavarian State Prize in Munich, Germany and the 2004 Ranamok Glass Prize, the major Australian award for the medium.

Chaseling’s favoured form is a large open vase carrying a combination of pattern and visual narrative, inside and outside. The artist paints images with colour glass enamels onto white glass, which is then fused with cut and tiled Bullseye colour glass, achieving a complex layered interaction of pattern and visual narrative. The fused sheets are rolled up into a cylindrical form and blown, a process requiring the expertise of several glass technicians. The surface is then ground back. The ‘roll-up’ process, a combination of fusing and blowing, was pioneered in international studio glass production by Chaseling and fellow glass artist Kirstie Rea.

In his work Chaseling is essentially a storyteller whose engaging images derive from nostalgic popular culture such as comic books and boys’ own annuals. There is a dream-like quality in his snapshots of familiar, ordinary life and a nod to another time, a parallel world of memories and associations. For the artist the images exist to suggest rather than circumscribe, and their decorative setting and enigmatic texts further locate them in the spaces of the imagination. Chaseling’s vigorous style and bold palette reflect the influence of the Venetian glass tradition; paradoxically the modernity of his work and its technical bravura confirms its place within the medium’s enduring language of ornamentation and innovation.