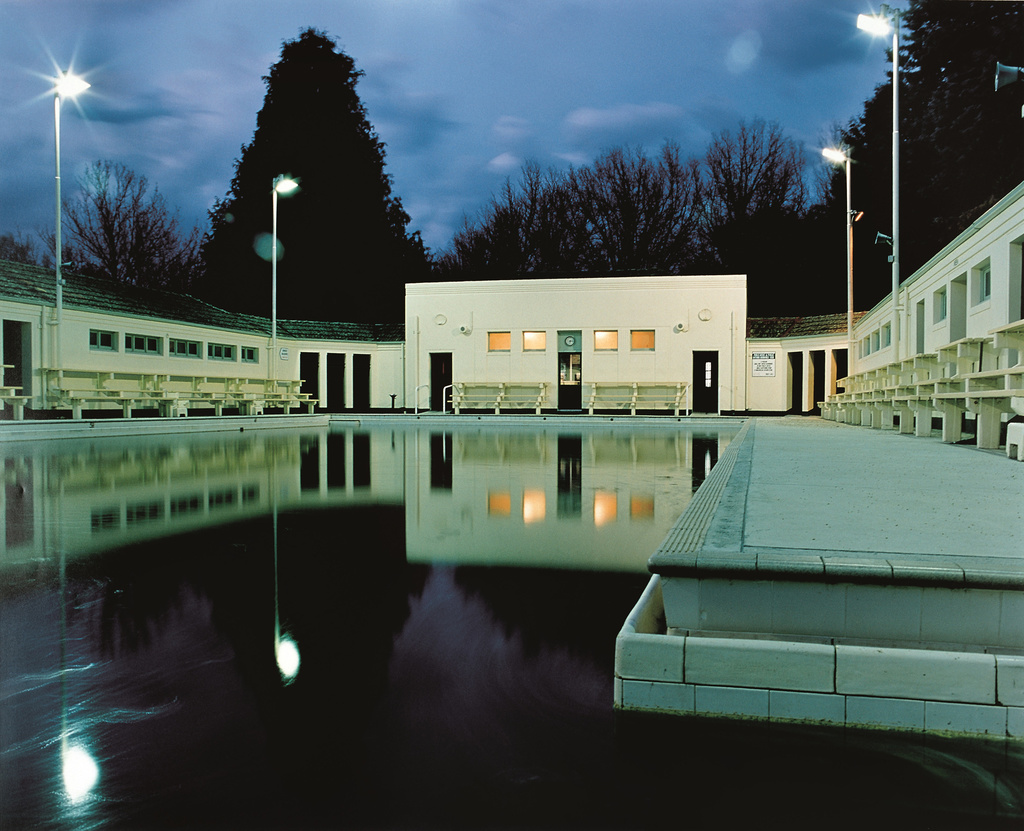 Marcia Lochhead is a graduate in Photomedia from the ANU School of Art. In 1994 she received a Samstag Scholarship for study overseas and in 1996 a Masters degree from the Glasgow School of Art in 1996. She has worked professionally in the field of photography since 1994, including lecturing, curating exhibitions and record photography. Lochhead’s work has been shown in a number of group exhibitions in Canberra, Hobart, Alice Springs, Glasgow and Salem, Virginia, in the United States. Her solo exhibitions include Mirror – the pool series – seen in 2004 at the Canberra Contemporary Art Space and the Centre for Contemporary Photography in Melbourne.

Manuka Swimming Pool is one of the Mirror series, documenting the institutional and public swimming pools in the Canberra region. The pools have been photographed absent of people, with the water’s surface a mirror of the environments that surround them. The works have a documentary component but are also highly evocative poetic encapsulations of an aspect of Australian national identity: sporting prowess in the water. Lochhead is herself a swimmer and has an affinity for the environment of the public pool, its reflective surfaces and working components.

Whether reflecting the historic art deco building of the Manuka swimming pool or the ragged and scarred hill in the rural landscape behind the Captains Flat public pool this series seems to echo the sights, sounds and smells of summer in Australia at the local pool. The Mirror series also acts as an historic record of these Canberra swimming sites and aptly records the diverse nature of their environments – from the inflatable dome covering Civic Pool to the melancholy image of the Big Splash Water Park in the off-season with its greening water covered in fallen autumn leaves.

Swimming pools in Australia are an intrinsic part of our national experience, and are by and large perceived as a democratic right. Some have been the sites of significant battles, infamously the Moree pool in 1965, when an attempt by the Freedom Ride defenders of Aboriginal rights to reverse the ban on Aboriginal people using the pool led to a melee. Pools are at the heart of our national psyche, both our smug sense of athletic superiority and our strong sense of decency and democratic spirit, neither of which is without contention.