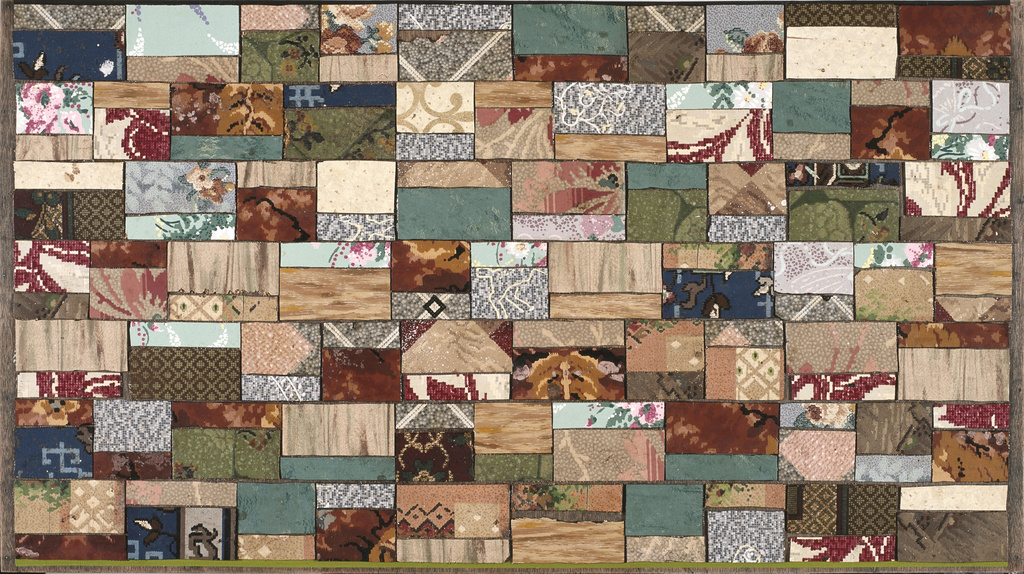 Vivienne Binns was born in Sydney and studied art at East Sydney Technical College in the 1960s. Since her first solo exhibition at Watters Gallery in Sydney in 1967 her practice has centred on art outside traditional hierarchies of production and dissemination. Binns was a leading figure in feminist art-making and criticism in Australia in the 1970s and a pioneer of community art, starting with the ground-breaking Mothers’ memories, others’ memories project in Blacktown, Sydney, in 1979.

Lino, Canberra and tile formation is a work from the series In memory of the unknown artist, in which Binns acknowledged the anonymous artists and designers of the everyday objects that pervade our lives. It’s a patchwork of linoleum fragments of different designs, salvaged by the artist from old Canberra houses and cut into small rectangles, then reassembled in an animated and elegant composition. The work is both abstract and representational – as are the different lino patterns – and invokes visual languages from a variety of cultural sources. This omnivorous impulse is characteristic of Binns’s practice, which in equal measure celebrates and interrogates creative endeavour as core to a shared humanity.

The work has a strong connection to landscape, evident in its emphatically horizontal format, and the artist’s juxtaposition of lino shards selected and placed to suggest land and sky. These simple bold pictorial elements evoke the landscape art of Antipodean modernists such as Sidney Nolan, Fred Williams and Colin McCahon, while the organised jumble of colour and pattern recalls ornament in Islamic art, traditional women’s craft and geometric abstract painting. The element of chaos, the genre of assemblage and the choice of fabricated, found materials also locates this work alongside a tradition of iconoclastic modernism from Dada to Robert Rauschenberg.

Lino, Canberra and tile formation provides a link to the domestic heritage of Canberra through its materials. In drawing attention to unsung artists and hidden histories of visual endeavour in this assemblage, Binns also invokes the idea of material artefact as a carrier of personal and general histories. The work is both an emblem of the physical and cultural landscape of the Canberra region as well as a hybrid of modernist art and industrial design.