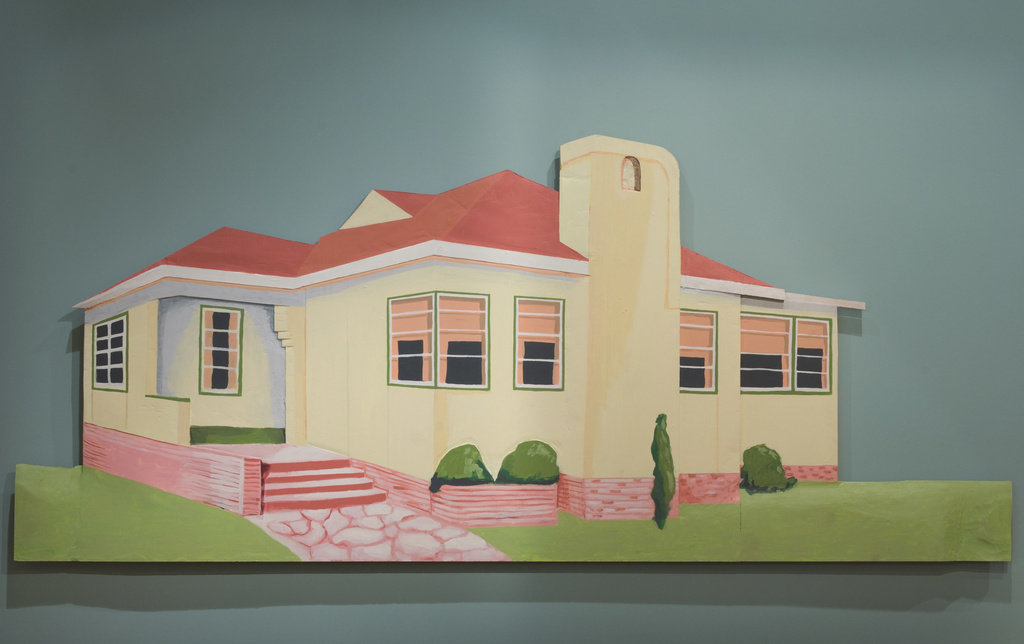 House from Inhabiting the archive

1997, synthetic polymer paint on composition board

David Watt was born in Paisley, Scotland and came to Australia (Adelaide) with his family in 1966. He gained a Bachelor of Fine Arts from the South Australian School of Art in 1980 and a Masters of Fine Arts from the University of Tasmania in 1984. He subsequently taught at the Curtin University of Technology, Perth and the ANU School of Art, where he was Head of the Sculpture Workshop from 1991 until his death in 1997. Watt was actively involved as an artist and organiser in regional art exchanges, contemporary art spaces, sculpture exhibitions and festivals, and was a prime mover in the important Canberra National Sculpture Forum of the 1990s.

Watt’s art practice encompassed drawing, installation and performance, frequently in combination. His work was playful, witty and, at times, comedic in a way that was both sophisticated and slapstick. The source material for his sculptural installations – and drawings – came from the post-war ‘boy’s own’ world of Popular Mechanics magazines and field guides to science and engineering.

The ‘House’ in the CMAG collection was part of a larger work, Inhabiting the archive, which Watt produced for a major group exhibition Archives and the everyday, held in Canberra in 1997. The project involved artists drawing on institutional collections for work that was variously installed in the Canberra Contemporary Art Space, the ANU School of Art, CSIRO Entomology, Old Parliament House and the National Gallery of Australia; Watt’s work was displayed across the façade of the National Library of Australia. A series of ‘dream homes’ realised as brightly painted relief sculptures present as a frieze – derived from trade catalogues in the Ephemera collection of the National Library they appear as representative of the material and social aspirations of Australian families in the second half of the twentieth century. This house is from a 1941 brochure for Hardy’s fibrolite and is emblematic of Canberra domestic architecture of the period, much of which survives today.

Watt was an important figure in contemporary Australian art, and particularly so in Canberra, as an engaged and influential practitioner and teacher, strongly committed to and supportive of the local arts community. This work from Inhabiting the archive has particular significance to Canberra for its site-specific design for the National Library and its potent reference to the lived experience of dwellers in the national capital.