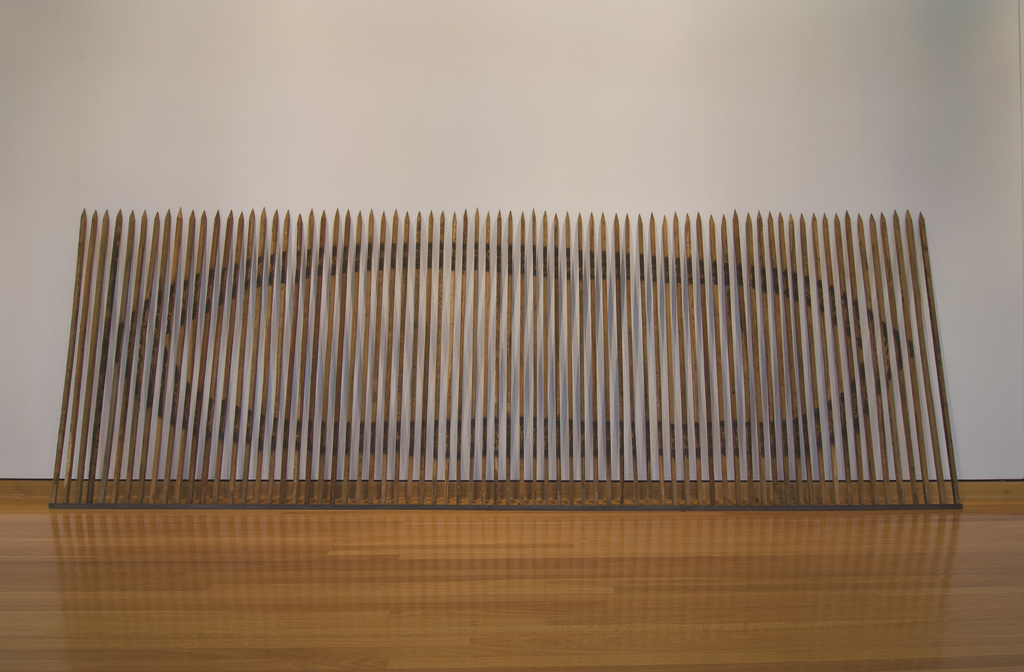 Wendy Teakel was born in Wagga Wagga. From 1976 to 1979 she studied for a Dip.Art (Applied) in sculpture at the (then) Riverina College of Advanced Education. Since moving to Canberra in 1985 for postgraduate studies at the ANU School of Art, Teakel has lived and worked in the local area.

She is currently Head of Sculpture at the ANU School of Art.

She has participated in numerous group and solo exhibitions in Australia and Thailand since 1979. Teakel has received a number of significant awards including the inaugural CAPO Fellowship (1993), the Alice Prize (1995), artsACT Creative Arts Fellowship (1996) and the Canberra Critics’ Circle Award (2002).

End and beginning is an eloquent sculptural statement. Formally it is composed of 73 garden stakes placed against a wall. Occupying a central position is a large ellipse drawn over the frontal surface of the stakes. The seeming simplicity belies conceptual complexity. For much of the artist’s work in the decade prior to the completion of this piece, the notion of the journey has been integral. The journey, for Teakel, is a means of enquiry into the self and an invitation to viewers to participate in the artist’s journey and in their own.

Teakel is not proscriptive but rather suggestive. Devices such as the spatial gaps between each stake and its neighbour(s) are used to create not only a soothing spatial flow through and around the work, but also allude to possibilities of ongoing flux, spatial, temporal and conceptual. Likewise, the ellipse implies constant movement and can be read as a container, a void waiting to be filled.

Meaning remains with the individual viewer. The artist has opened a dialogue and offers a journey for viewers to distil and analyse the world as presented by her as a way of finding meanings relevant to them. The commanding visual presence of End and beginning attracts, the finely-tuned aesthetic and conceptual nuances intrigue and seduce.