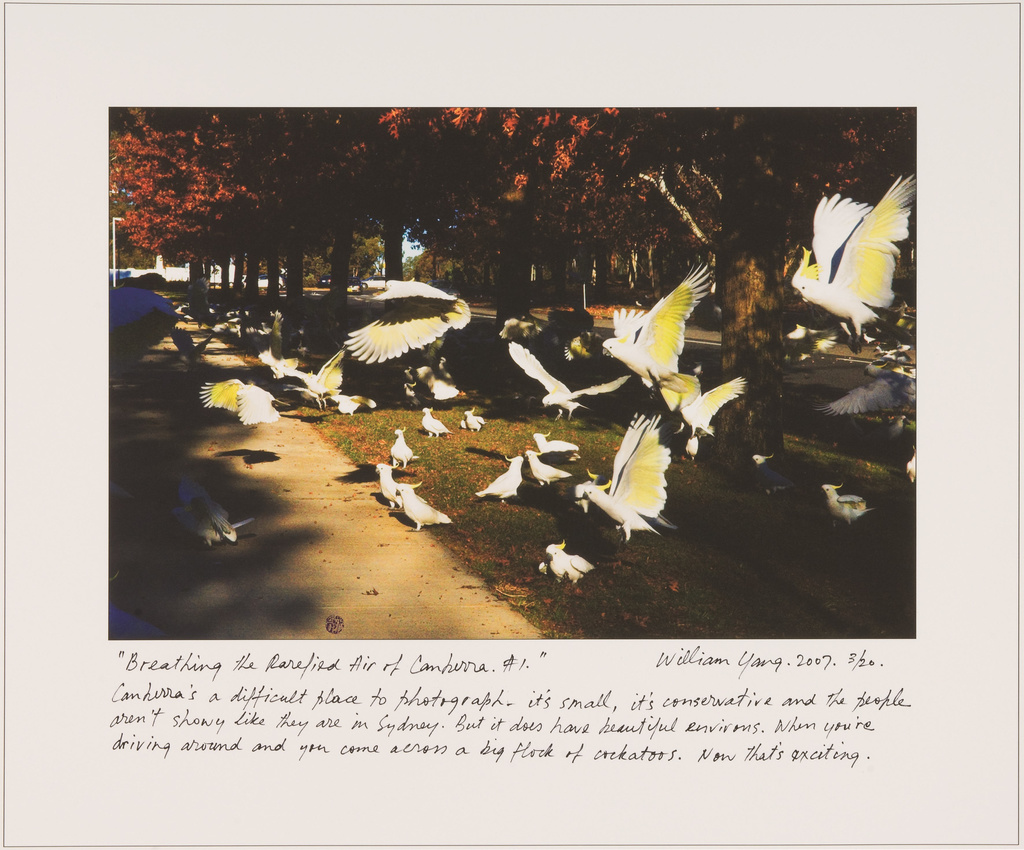 Breathing the rarefied air of Canberra

William Yang is one of Australia’s best-known photographers. His work has been shown in many solo and group exhibitions in Australia and overseas, is held in all major public art museum collections in this country and has been widely published in books, exhibition catalogues and magazines. Yang came to prominence in the 1980s with his vibrant documentation of aspects of Sydney’s creative milieu, including writers, visual artists and performers such as Patrick White, Brett Whiteley and Mel Gibson, and the burgeoning inner-city gay sub-culture.

Yang was born in 1943 in North Queensland into a family who had migrated there from China in the 1880s (and anglicised their name to Young). He studied architecture at Queensland University and moved to Sydney in 1969, where he worked as a playwright and freelance photographer. His first solo exhibition in 1977, Sydneyphiles at the Australian Centre for Photography, caused a sensation because of its frank depiction of the hedonistic Sydney party scene. In the mid-1980s Yang began to explore his Chinese heritage and the themes of his work expanded. In 1989 he integrated his skills as a writer and visual artist, performing monologues alongside slide shows of his photographs to a live audience. The subjects of these performances wove together stories of migration, travel, childhood and death and dying. These works have taken Yang all over the world and have been extremely well-received.

In 2007 Yang was awarded the HC Coombs Creative Arts Fellowship at the Australian National University and spent some months in Canberra, living and working on campus. He worked with the National Portrait Gallery on projects and wrote a children’s play for the Jigsaw Theatre Company as well as taking photographs around town and performing and speaking at the ANU. Friends had warned him he would be bored in Canberra but Yang found the intellectual life very stimulating; this photograph of the cockatoos reflects his delight in a characteristic Canberra moment and conveys a sense of something refreshing and alive in the atmosphere.