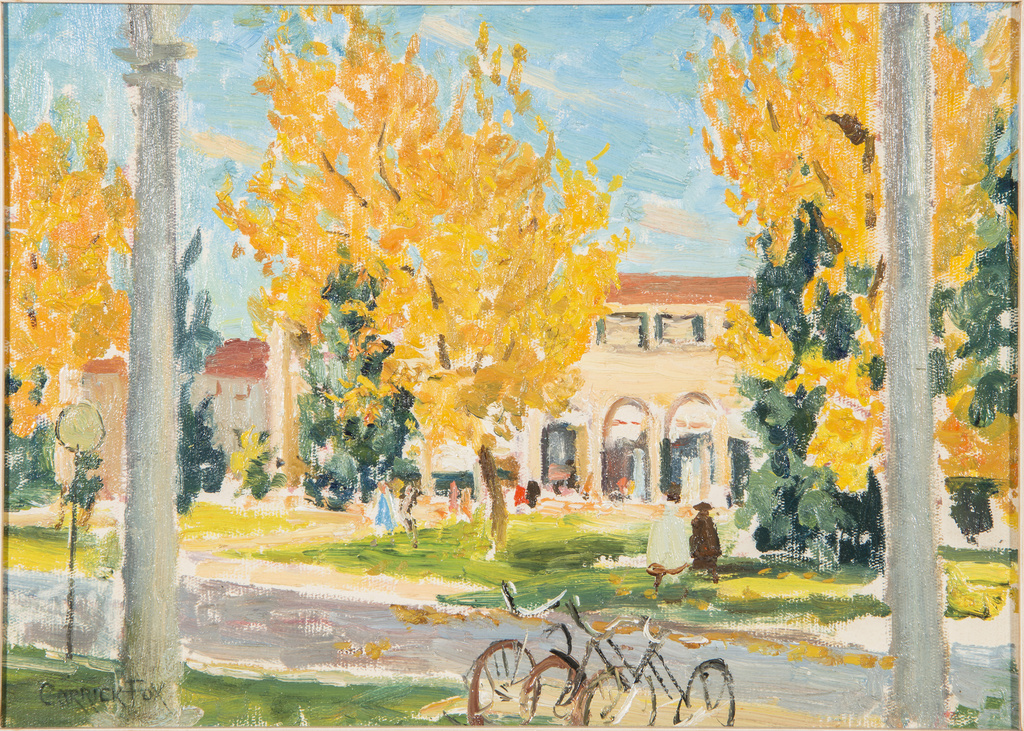 Ethel Carrick (Fox) was born in England in 1872. She is well known for her brilliantly coloured post-impressionist paintings of European subjects of crowded streets, markets, cafes and beach scenes. She met her husband, renowned Australian artist Emanuel Phillips Fox in Cornwall, UK during her early art student days and the two spent time travelling and painting between Australia, England and Europe.

E. Phillips Fox died in 1915, ten years after they married. Ethel Carrick continued to travel between Australia and Europe, setting up an art school in Paris for Australian and American students and promoting her husband’s work within Australia. She returned finally to Melbourne in 1952 and died a few days later from a heart attack, aged 80.

Ethel Carrick Fox’s work is held in the National Gallery of Australia and all state and major regional galleries, generally French scenes from the first decades of the twentieth century, including her classic subjects, paintings of the Nice Flower Market and the Luxembourg Gardens in Paris. There are only a few Australian subjects by Carrick Fox in these collections; the Australian War Memorial holds a work from 1942 depicting women’s voluntary war work, National Defence League Depot, St Michael's Hall, Sydney and there are several Sydney beach scenes, but in her oeuvre European subjects are in the vast majority.

This work, Colonnades of Canberra’s Civic Centre, depicts the instantly recognizable Sydney/Melbourne Buildings in Canberra’s city centre on a bright autumn day. The yellow poplars and bicycles in the foreground are typical of the city, while her dappled brushwork captures a cool breeze and many colours of a sunny autumn day in the nation’s capital.

The Melbourne and Sydney Buildings were built between 1927 and 1946 in two phases. The colonnades are reflective of the Italian Renaissance artist Brunelleschi’s work, of the Italian and Spanish Renaissance and the 20th century revivalist style known as ‘Spanish Mission.’ Carrick spent many years in Europe depicting its landscape, and her works included in the important survey exhibition Art, Love and Life: Ethel Carrick and E Phillips Fox held at Queensland Art Gallery in 2011 show works with very similar colonnades.

In 1944 Ethel Carrick exhibited 62 paintings of Canberra at the Masonic Temple in Canberra. The paintings which attracted considerable attention according to the Canberra Times (published 8th Sept 1944) were of women workers engaged in the patriotic war effort (such as the work now in the Australian War Memorial collection). The greater number of works consisted of Canberra subjects such as Outside Albert Hall, Post Office in Autumn, Poplars in Spring, Near Duntroon and Civic Centre. However, no such works are currently held in major public collections in this country. In the only monograph solely dedicated to this artist, Susanna de Vries’s Ethel Carrick Fox: Travels and Triumphs of a Post-Impressionist (Pandanus Press, 1997) there is no mention of her visiting Canberra or producing any works here. It seems likely that paintings such as Colonnades of Canberra’s Civic Centre (c. 1944) are held only in private collections.