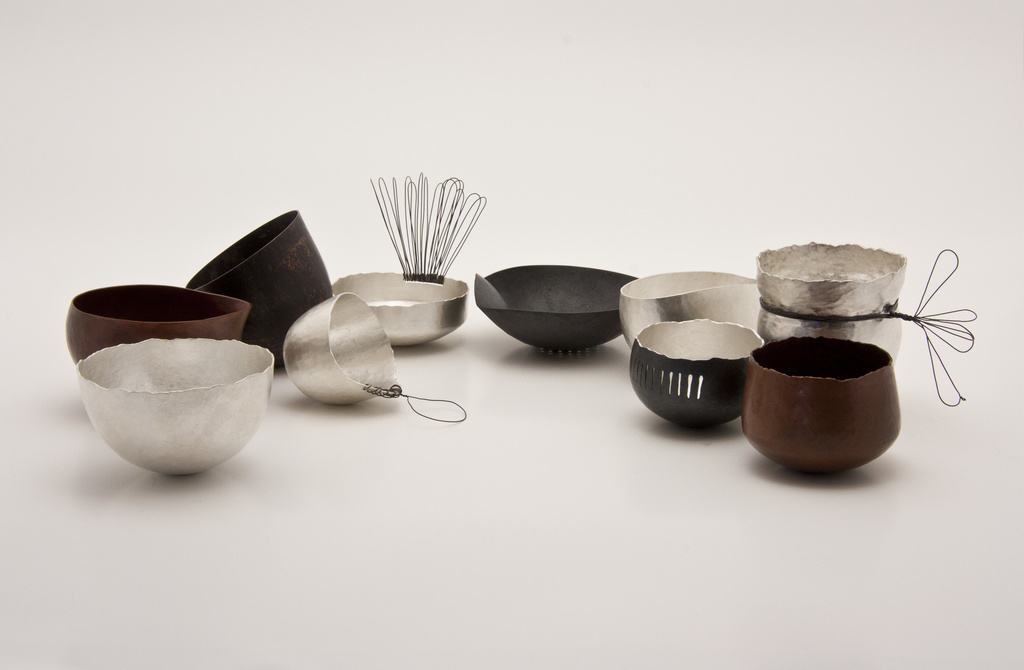 This composite work is the result of a focused ten day period of production by one of the Canberra-region’s most celebrated early career designer makers.

Alison Jackson graduated from the ANU School of Art with an Honours degree in Gold and Silversmithing in 2008. The same year she established Pocket Studio in Queanbeyan and began work with Robert Foster at the Canberra-based and internationally-successful tableware studio Fink & Co. Jackson worked there as quality control manager until 2013 while simultaneously developing her own production lines in jewellery and tableware, often outsourcing aspects of production.

Jackson is an articulate advocate for the importance of designers in contemporary life, and in particular for designers that maintain an independent studio practice. She has contributed to the increased visibility of contemporary designers in the Canberra Region in the context of Canberra’s Centenary in 2013, and subsequently.

Jackson was an exhibiting artist in the exhibition Young. Hot. CANBERRA. Held at the Gallery of Australian Design in January 2013 and helped to establish FiveFold, a design collective, studio and exhibition space located in the ‘Lonsdale Street Traders’ space in Braddon in 2013. ‘10 vessels / 10 days’ was exhibited for the first time in the context of Jackson’s first solo exhibition, ‘Table Tools’, which was held at Craft ACT Craft and Design Centre 10 September to 24 October 2015. The exhibition and its catalogue received funding support from the ACT Government via artsACT and the Australia Council for the Arts. In November 2015 the Canberra Critics Circle presented Jackson with a Rosalie Gascoigne Memorial Award on the strength of the exhibition.

The catalogue accompanying the exhibition provides a reflection from the artist on each of the ten objects. Freelance curator Merryn Gates, writes about Jackson’s process in the catalogue:

Over these 10 days Alison gave herself free rein to enjoy a period of design led research. Only the hours of a working day, and the size of the metal set any limitation. There was no commission to consider, no thoughts for marketability, no limits regarding cost. ...She used this time as a ‘strategy for experimentation’ to provide a hiatus in studio production so that ‘...everything familiar becomes thrown into a new light’. Steel wire, normally used only while an object is being made, was allowed to feature on finished work; delicate spouts appear where the hammer has beaten an uneven edge; splits remain and become the basis of a sieve.

Purchased with funds from the Meredith Hinchliffe Fund