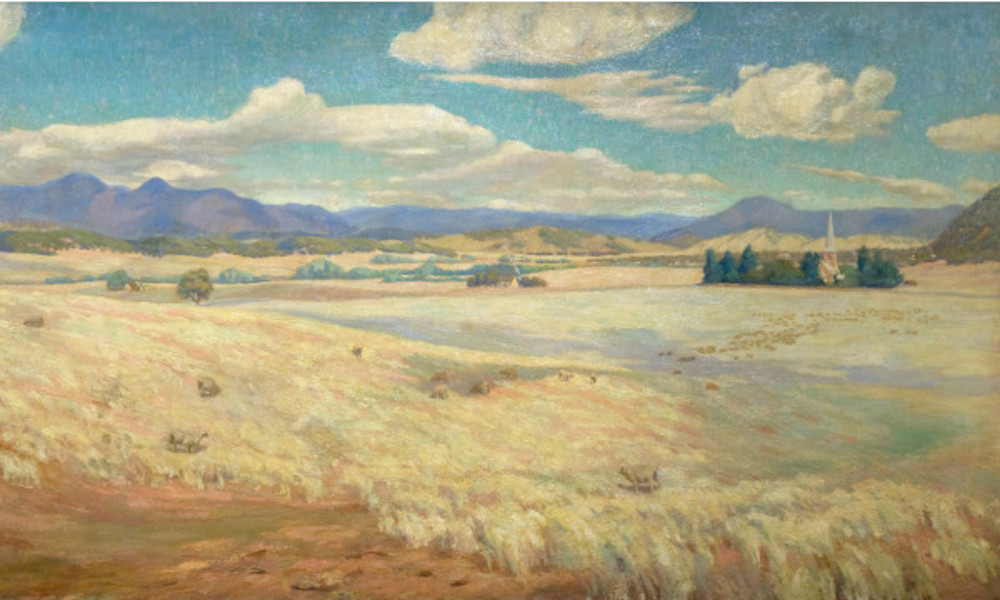 As a city initiated specifically as a capital for the new Australian nation, Canberra has been a place that quickly invited visual representation. As it developed, artists have seen Canberra through different lenses, and these have shaped the way they understood and interpreted the evolving landscape.

In this exhibition, drawn primarily from CMAG’s collection, visitors journey through four key periods of the city’s development and for each, will encounter an object that represents a prism to understand a way of seeing at that time.

The earliest approach to viewing the capital is encapsulated by two rarely seen large paintings from 1913 which show a valley of golden fields ringed by distant hills. Here the surveyor’s theodolite represents their role in claiming and ordering the landscape to map the alignments critical to the Griffin plan.

The initial flurry of activity leading up to 1927 with the building and opening of the provisional Parliament House gave way to decades of inertia where the view of the city barely changed, and the Molonglo still threaded lazily through a landscape sparsely dotted with exotic plantings and red roofs. Paintings by Douglas Dundas, Dorothy Thornhill, Elioth Gruner and photographs by Harold Cazneaux sit above the desk of long serving first Secretary of the Federal Capital Advisory Committee Charles Studdy Daley who played a quietly critical role in shaping the Canberra we see today.

In 1959 Canberra burst out of this torpor with a decade of intensive development heralded by the commissioning of Civic Square. The city called out to a new generation of families to make their lives here, including immigrants from all over the world. Tom Bass’s statue of Ethos for Civic Square epitomised this optimistic welcome and became the symbol for the new community. Acasting of the head of this statue is joined by Max Dupain’s photographs reflecting this moment of optimistic acceleration and Enrico Taglietti’s model for the Center Cinema complex represents a new depth of sophisticated design and cultural entrepreneurship.

By the late 1970s, Canberra was a place many artists now called home. Rosalie Gascoigne, Richard Larter and Michael Taylor grew to know the landscape intimately and made work in response. Others such as Mike Parr, Toni Robertson and Bruce Reynolds irreverently reinterpreted the formality of government structures while Ian North, Waratah Lahy and David Flanagan found the suburbs both sublime and strange. The devastatingfire of 2003 changed the way the city understood itself and this moment is represented by a burnt-out dishwasher, retrieved for the CMAG collection from a home in Duffy.  It triggered a new way of seeing the landscape and appreciating the fragility and preciousness represented in works by G.W. Bot and Helen Aitken-Kuhnen.

Throughout all these periods, works by Aboriginal artists including Brenda Croft, Dean Cross, Kevin Gilbert, Paul House and Matilda House are presented that disrupt and counter these narratives and their works remind us that Aboriginal artists see country layered with cultural knowledge as well as personal experience.