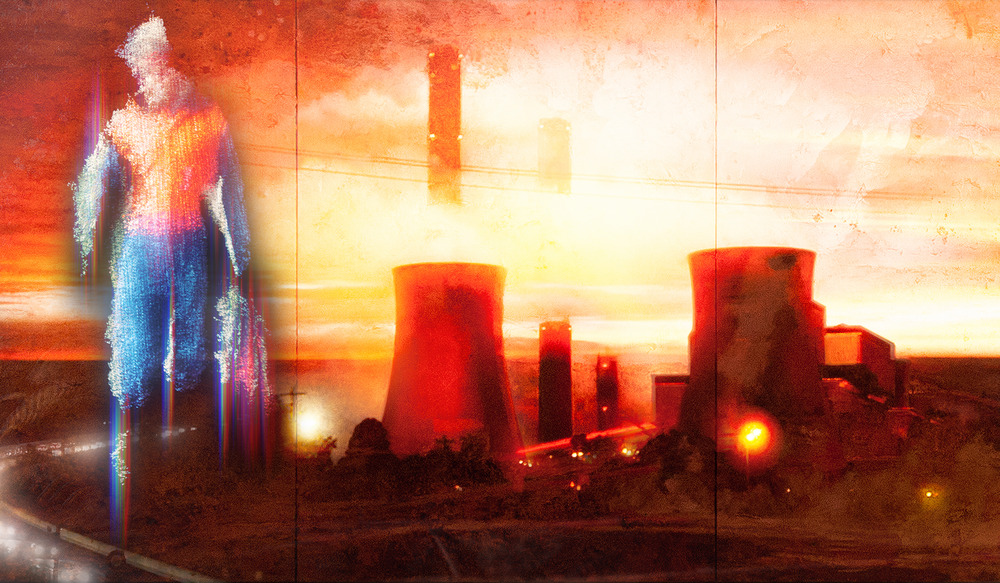 From ‘eco’ to ‘FIFO’. From high-value to high-vis. This art installation encompasses the complex political, environmental and fundamental social issues that are occurring right now and for the visible future.

A collaboration between artists Mandy Martin, Alexander Boynes and musician Tristen Parr, High-Vis Futures is a sequence of sound, video projection and mixed media artworks depicting the intimate connection between industry, carbon emissions and the end of the fossil fuel era. From a lurid dawn to a massive open cut coal pit fire, these are dramas on an epic scale with fatal consequence.

Mandy Martin is a practising artist with a national and international reputation for conservation and landscape. She was born in 1952 in Adelaide and studied at the South Australian School of Art from 1972-75. Martin has held numerous exhibitions in Australia, Mexico and the USA. She has also been exhibited in, France, Germany, Japan, Taiwan and Italy. Her works are in many public and private collections including the National Gallery of Australia, the Art Gallery of New South Wales, the National Gallery of Victoria, The Art Gallery of South Australia and other state collections and regional galleries. In the USA she is represented in the Guggenheim Museum New York; the Los Angeles Museum of Contemporary Art, the Nevada Museum of Art, Reno and many private collections. Martin was a lecturer at the School of Art, Australian National University between 1978 – 2003 and then a fellow there between 2003-06. She is currently an Adjunct Professor at the Fenner School of Environment and Society, Australian National University Canberra.

Alexander Boynes is an Artist, Curator, and Program Manager at the Canberra Contemporary Art Space. He received his Bachelor of Visual Arts (Honours) at the ANU in Gold and Silversmithing; however, his practice has evolved to include painting, photography, print media, light-based work and video installation.  He is represented in the collections of the Center for Art + Environment, Nevada Museum of Art (USA), Artbank Australia (VIC), the ACT Legislative Assembly (ACT), the University of Canberra (ACT), the Macquarie Group Collection (NSW) as well as numerous private collections throughout Australia and in London. His recent curatorial projects include Straight Outta Canberra (MAY▲SPACE, Sydney, 2018), and Blaze Twelve 2018 (CCAS Gorman Arts Centre, 2018). Previous exhibitions at CCAS include 2°— Art and Climate Change, 2016; Footy Fever, 2015, Blaze Nine, 2015, Action Stations—Peter Maloney and Louise Paramor, 2014, and The Triangle – Political Art in Canberra, 2013 in addition to co-curating numerous projects. In 2013 Boynes established PRAXIS,a multidisciplinary art collective with choreographer/dancer Laura Boynes, and cellist/composer Tristen Parr to explore the link between visual art, performance, and sound.